What Does 'Branded Title' Mean?

You’re shopping for a car and a great deal catches your eye. It has everything you want and more, and it’s priced lower than comparable models, but the ad says it has a branded title. What is a branded title, exactly, and does it matter?

What is a branded title?

A car title contains a designation based on its previous history. A car with anything aside from a “clean” title is considered a “branded title” and has been written off as a significant loss at some point in its past. That can be from a variety of issues including a fire, flood, theft or most commonly, a collision.

But what does a branded title mean? Although there are a couple of exceptions, it means that the car’s insurer has declared the vehicle a total loss. Repairs to the vehicle exceed the reasonable cost of repairs to get it back into its pre-loss condition, so the insurer “buys” the vehicle from the owner and assigns it a title brand.

Maybe you’re wondering where it goes after being declared a total loss. Insurance companies routinely run these cars through auctions where purchasers pay pennies on the dollar with the intent to use them for parts, scrap metal, or to fix them up and sell them. While this may sound like a good way to get a bargain, it’s important to learn about the different types of titles first.

Fortunately, branded title cars often give you a clue into their past designation. Although the wording can vary from state to state, there are a handful of common brands that a car can have.

Perhaps the most generic term for branded title vehicles is “salvage title.” It can be used to describe almost any type of loss, depending on where you live in the country. Along with fire-damaged, floor-damaged and accident-damaged vehicles, it can be used to identify a car that has been stolen, declared a total loss and then recovered.

For a buyer, a title simply deemed “salvage” can be like buying a scratch-off lottery ticket—you just don’t know what you’re going to get. However, salvage branded title cars can usually be repaired, inspected and returned to the road. But at what expense? That’s what makes salvage titles wildcards.

The District of Columbia and every state in the U.S. uses salvage title branding aside from two: Alaska and Washington state. Instead, those two states issue a bill of sale.

Although it’s included in the salvage branded title category in some states, flood damage or water damage branding can be considered its own segment. These vehicles have been deemed a total loss because of extensive damage from water, particularly in hurricanes or overland flooding events.

When a salvage-titled vehicle has been repaired, inspected and deemed roadworthy, the title can be changed to “rebuilt” status. Other similar terms are “reconstructed,” “salvage rebuilt” or even “clean title rebuilt salvage.”

The only state that doesn’t have a specific rebuilt title designation is New Jersey. The title is switched to “salvage” upon being deemed a total loss, and it remains that way even after the vehicle has been inspected and repaired.

In many instances, a vehicle’s damage is so severe that its title is branded as “nonrepairable.” The vehicle can’t be repaired to ever be driven on the road again. Most often it’s because of such extreme collision damage that it affects the structural integrity of the vehicle.

Like a nonrepairable branding, some states use the term “junk” on the title for cars that have experienced damage beyond their fair market value. Cars can be deemed “junk” for reasons other than accident damage. A car that’s sold to a scrapyard to be dismantled can also be titled as junk so it can’t be rebuilt and resold.

Should you buy a junk branded title vehicle? It’s highly recommended to steer clear of any vehicle titled as junk unless it’s for parts or yard art. States that use the junk branding include Colorado, Illinois, Iowa, Missouri, Vermont, Texas, California, Michigan, Massachusetts and Oklahoma.

Sometimes, a new car can have problems so severe under warranty that it’s easier and more cost-efficient for the manufacturer to buy it back. Most state lemon laws have a provision for at least three unsuccessful attempts to repair an issue before it’s bought back, so this type of branded title doesn’t happen often. It can be called a warranty buyback or a lemon.

But what do they do with it, since the car likely still has unresolved issues? Depending on the state, the title can be designated as a lemon law buyback and sold at auction—after all, if a fix is ever discovered, the lemon could become a perfectly serviceable vehicle. You’ll want to know the vehicle’s previous history extensively before getting involved with one, and a vehicle history report is an excellent idea prior to snapping one up.

While all 50 states technically have lemon laws, only 19 of the 50 states require that the title is branded as a lemon. Those states include New York, New Jersey, California, Florida, Alabama, Connecticut, District of Columbia, Illinois, Louisiana, Pennsylvania, South Dakota, Vermont, Minnesota, and Washington.

Prior police or taxi title brand

Some states also report vehicles that have been previously used either in a police or taxi fleet. Even if they’ve never been in an accident, they are branded title cars simply because there’s such a high likelihood of unreported damage and high mileage. The title will have something like “prior police” or “prior taxi” on it.

These vehicles aren’t necessarily a bad buy, but it’s almost impossible to get a complete picture of their previous history. You should assume the worst and hope for the best if you entertain buying one. States that issue these titles are California, Florida, Massachusetts, Michigan, Vermont and Wisconsin. 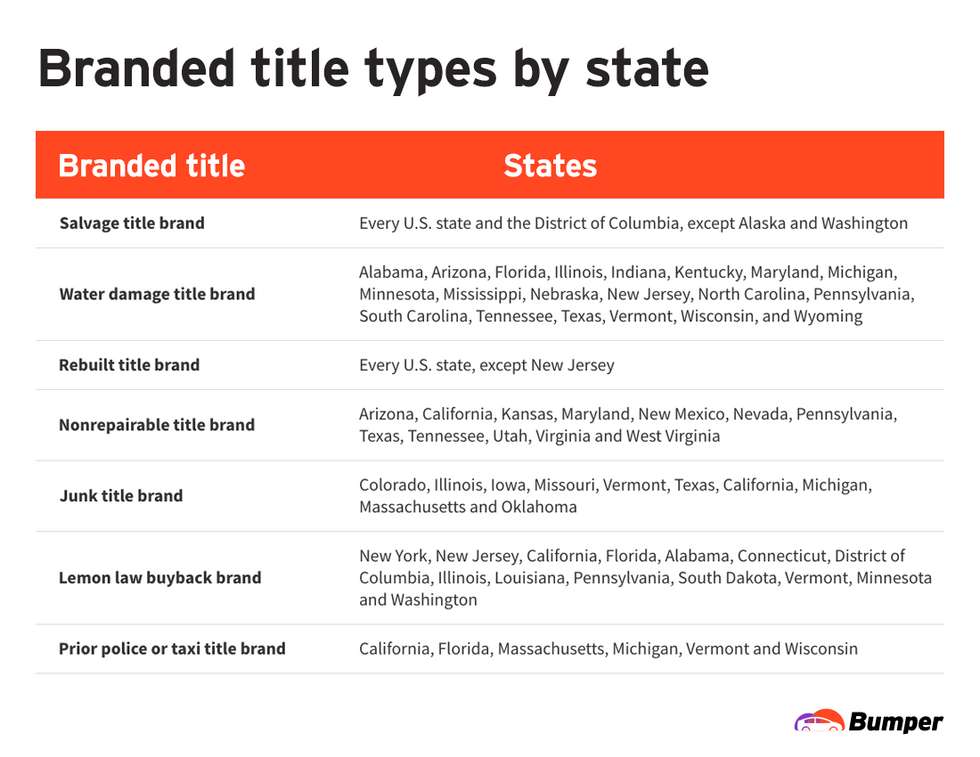 What is title washing?

Title washing is a form of fraud where a vehicle owner can move the car between states that have differing laws with the goal of removing an undesirable branding from the title. Since every state has their own laws regarding vehicle titling, some people unfortunately take advantage of this loophole.

For example, one state may have flood titles, but moving the vehicle to a neighboring state that uses the term “salvage” for flooded cars would wipe away the flood branding from the title. Worse yet, a salvage branded title car in one state could be moved to another where a clean title is issued for rebuilt cars, erasing any trace on the title of major issues.

An unsuspecting buyer could overspend or get into an unsafe situation through title washing. The best defense against it is a comprehensive vehicle history report that provides a car’s sale and accident history.

Is it safe to buy branded title cars?

What’s a branded title really mean for a car purchase? Not only could it be financially costly, but branded title vehicles with a checkered past can leave you in a position where your safety is at risk.

Most reputable dealerships avoid dealing with branded titles because they no longer carry any warranty. Once an insurer pays out a claim on a vehicle and the title is branded, the manufacturer’s obligations cease, although recalls are usually still performed free of charge.

Insurance can be a hassle for branded title cars, too. Since there has already been a major accident, it can be nearly impossible for an insurer to know what is new damage or what was pre-existing. As well, there’s no way to guarantee that everything is working properly, so the level of risk is higher for the insurance company.

And of course, there’s always the cost to consider. Even though you might be able to get a fantastic price on a rebuilt or salvage car, its value has already depreciated severely, and you can’t be sure that it’s going to be reliable. You could be in for a serious unexpected repair bill.

How can I find a ‘good’ branded title vehicle?

What is a branded title on a car going to mean for your vehicle search? It is possible to get a good car for a great price. One example is a stolen car that is eventually recovered after the insured’s claim is paid out. There could be little to no damage, but you’ll pay significantly less compared to the same model with a clean title.

Also, a newer car that has been written off due to flood damage could be a good buy if you don’t expect to make long trips and you know its life expectancy is going to be reduced. And if you’re a DIYer, buying a car with a salvage title can be a great way to save money on car parts to keep your current vehicle up and running as long as possible.

Tips for possibly finding a serviceable branded title vehicle include:

What does a branded title mean for you? For the vast majority of car buyers, it’s best to stay away. You could take a chance on a car with a branded title—maybe you win, maybe you lose. But whether you’re exploring the possibilities of a vehicle with a rebuilt or salvage title or a car with a clean title, do your due diligence and perform a vehicle history report.

What Does It Mean When a Car Is Totaled?

Is It Illegal to Drive Without Shoes?

Selling a Car Without a Title: What You Need to Know

What Is Good Mileage For a Car?