As the United States entered lockdown, Americans turned to their cars. Weekly average driving remains flat compared to pre-pandemic life, but walking and public transit use declined, according to a Bumper analysis of 2020 Apple Maps data.

Meanwhile, Americans on average walked 8% less each week compared to the pre-lockdown period of Jan. 1-March 15, 2020, according to Apple data.

Bumper examined 2020 Apple data for nationwide trends and to learn which states and cities saw the greatest increases and decreases in driving, public transportation and walking after the pandemic hit. 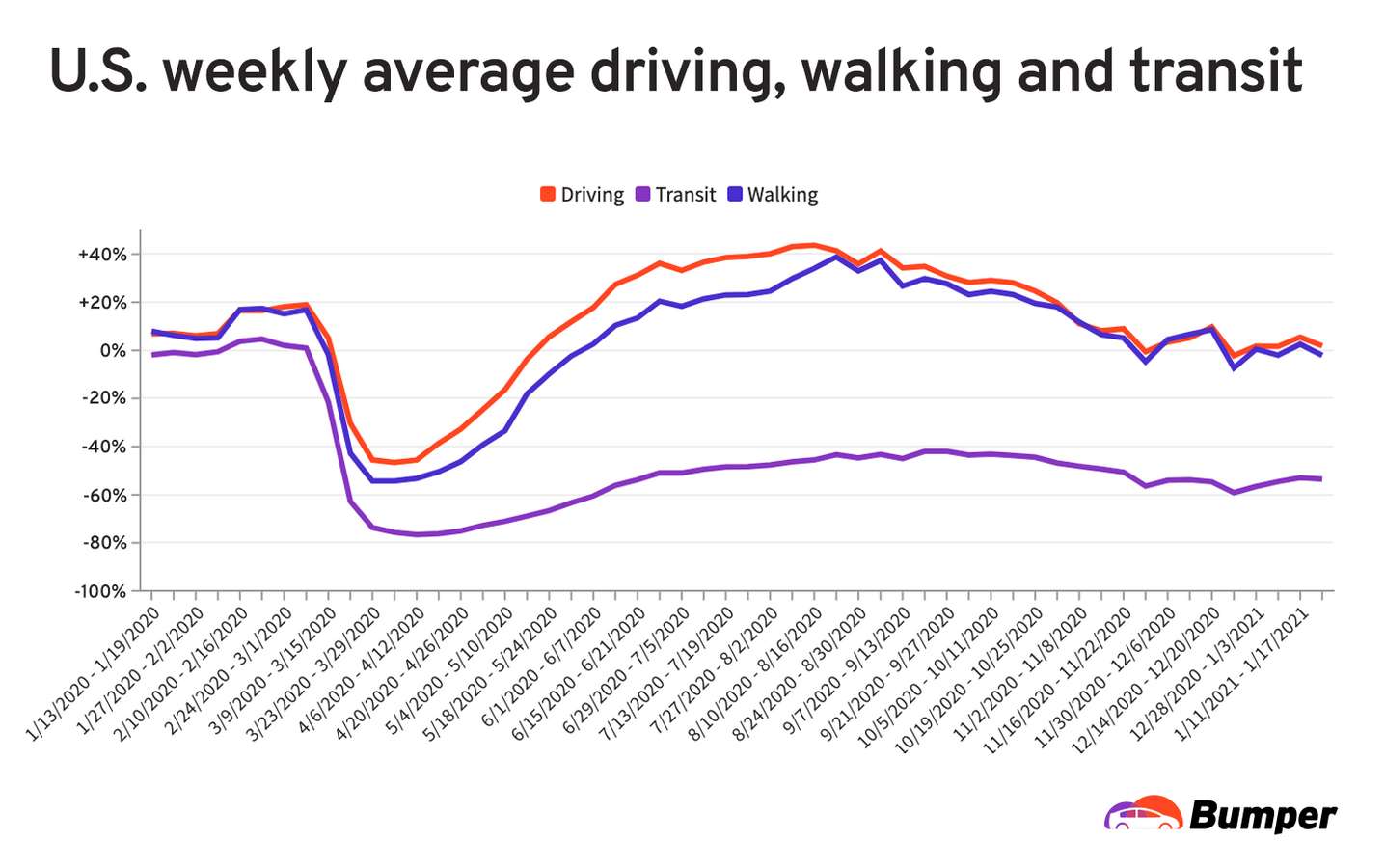 Percentage increases and decreases in driving, public transportation and walking activity were indexed against the weekly average from Jan. 1 through March 15, 2020, shortly before states began issuing lockdown orders.

Driving increases in some areas post-pandemic, but not everywhere

A return to pre-COVID-19 driving activity could suggest good news in 2021 for the automotive industry, which wants to tap into pent-up demand after new car sales decreased 15.3% in 2020 and used car sales—while recovering in the second half of year—dropped 8.6% in 2020, according to car analyst Cox Automotive.

“The states and cities where we saw average driving activity decrease include many tourist destinations, such as areas in Hawaii, Florida and California,” said Evan Schlossman, a data analyst for Bumper. 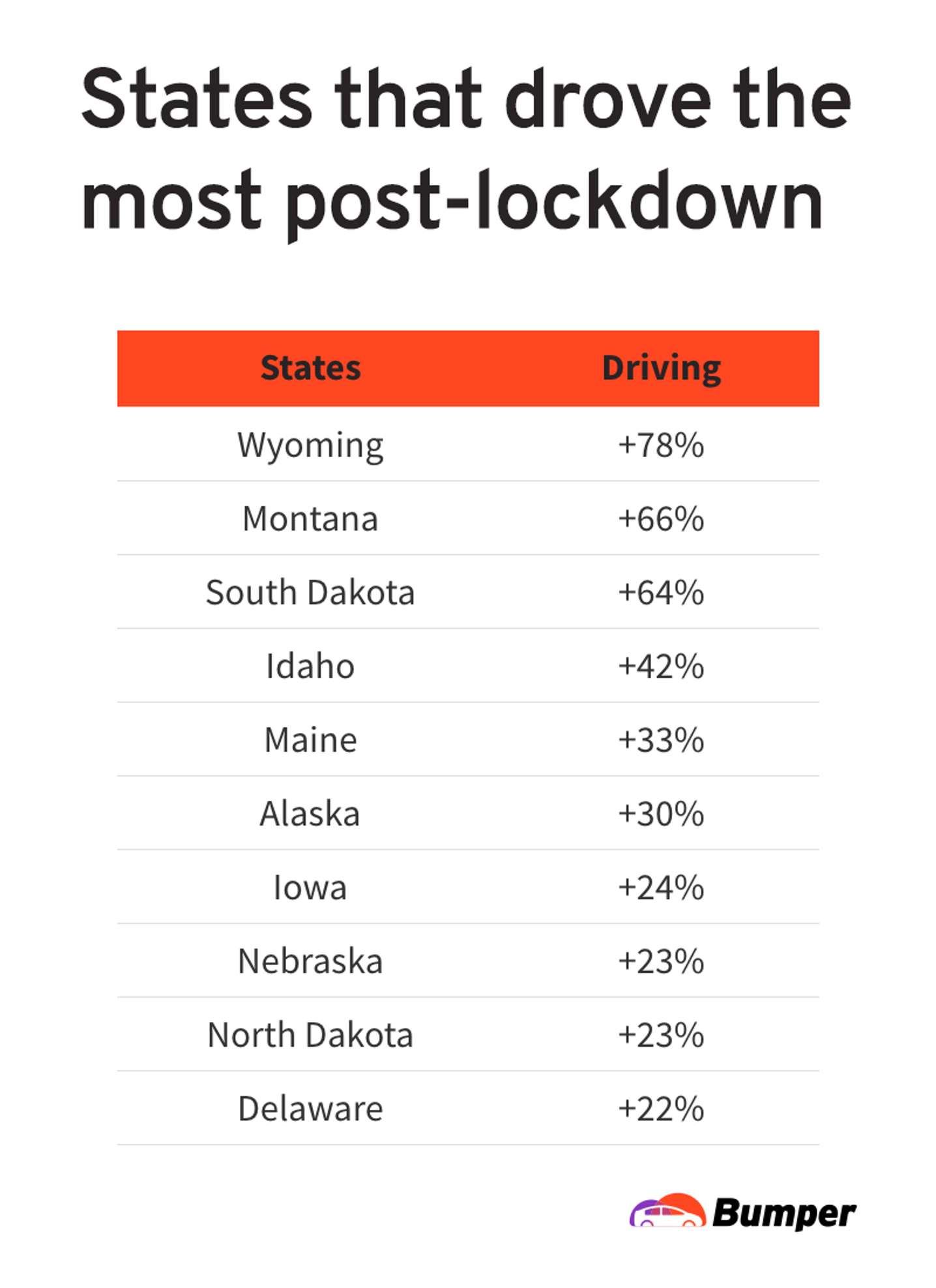 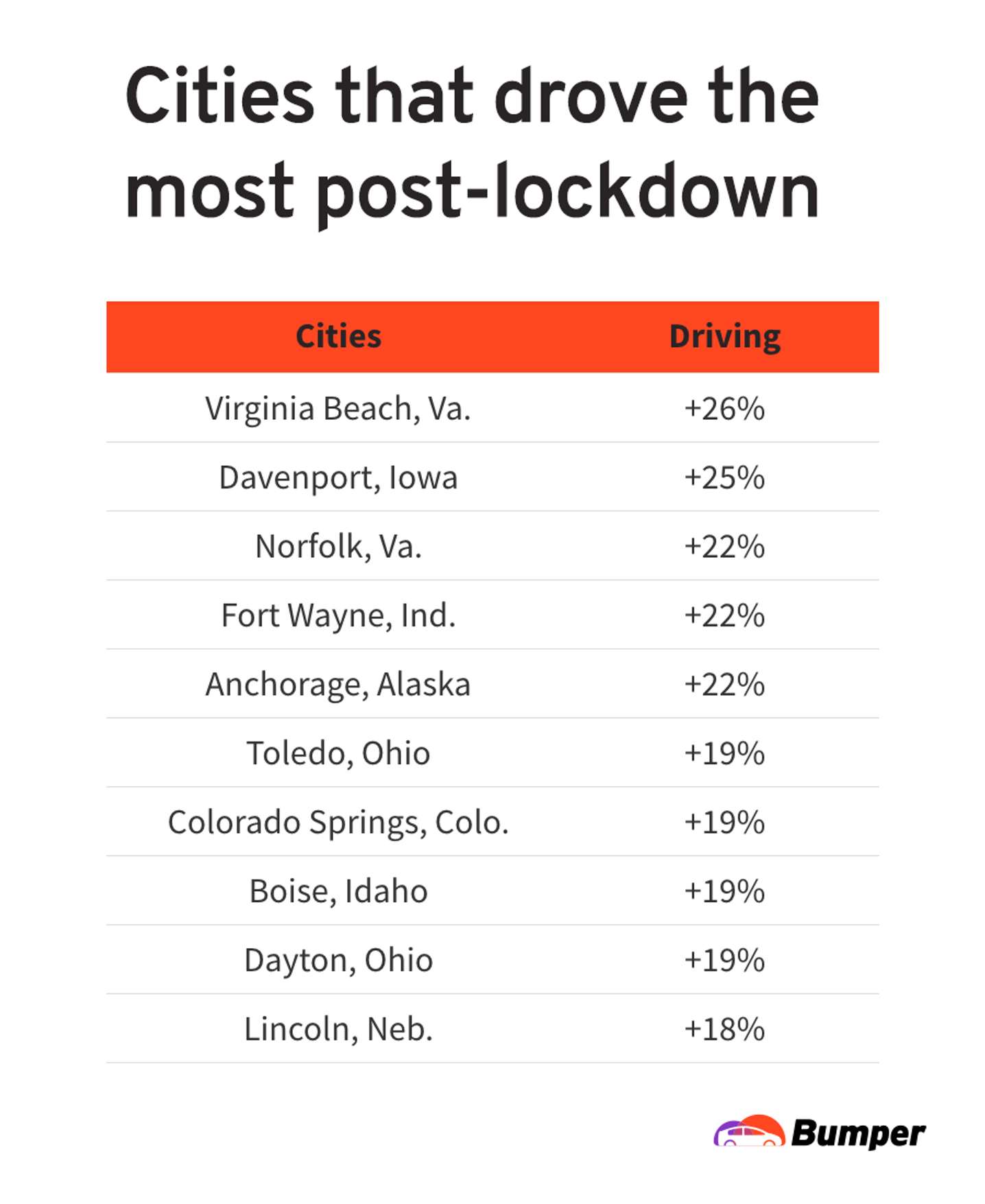 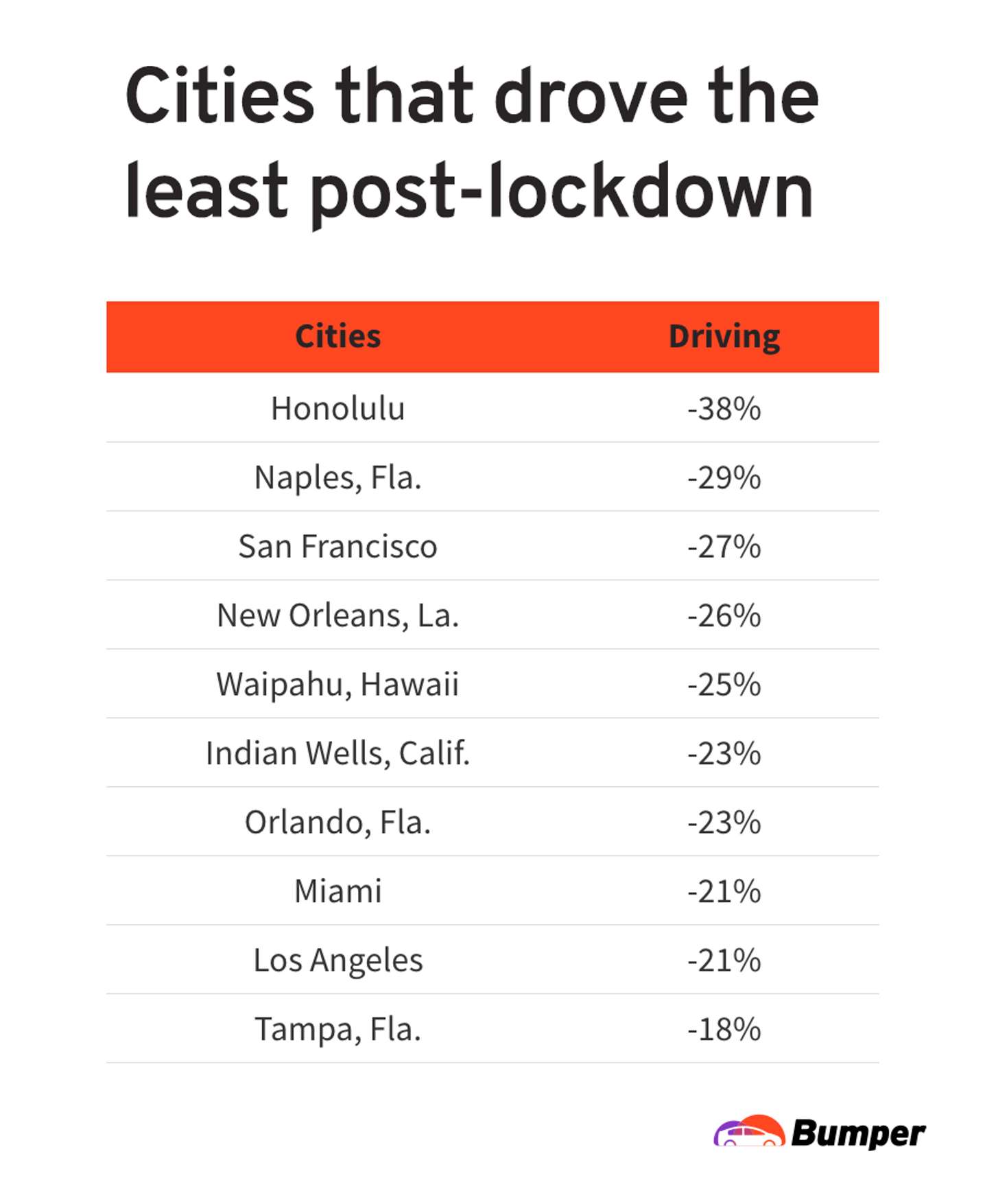 Public transportation use craters—except in one state 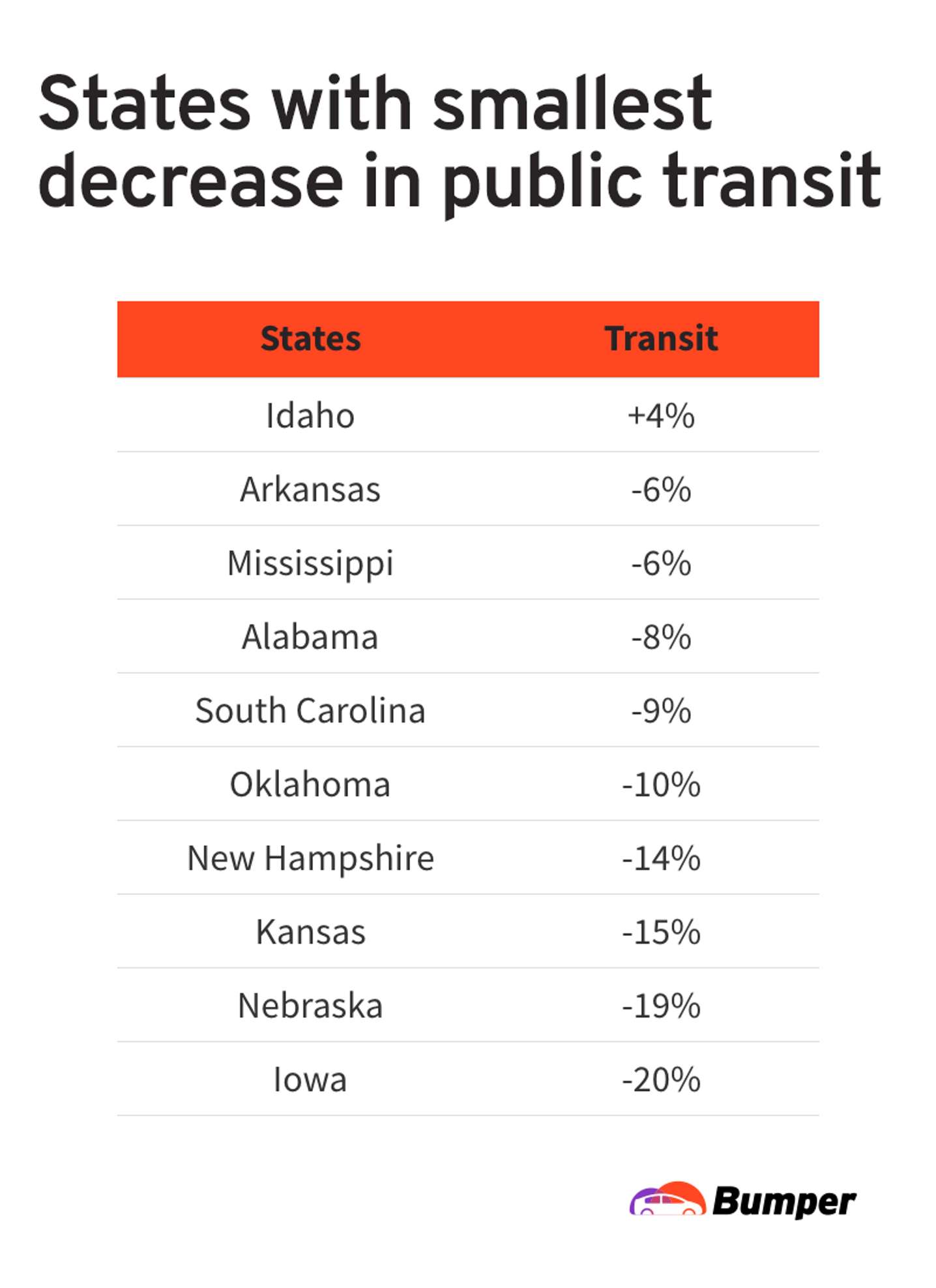 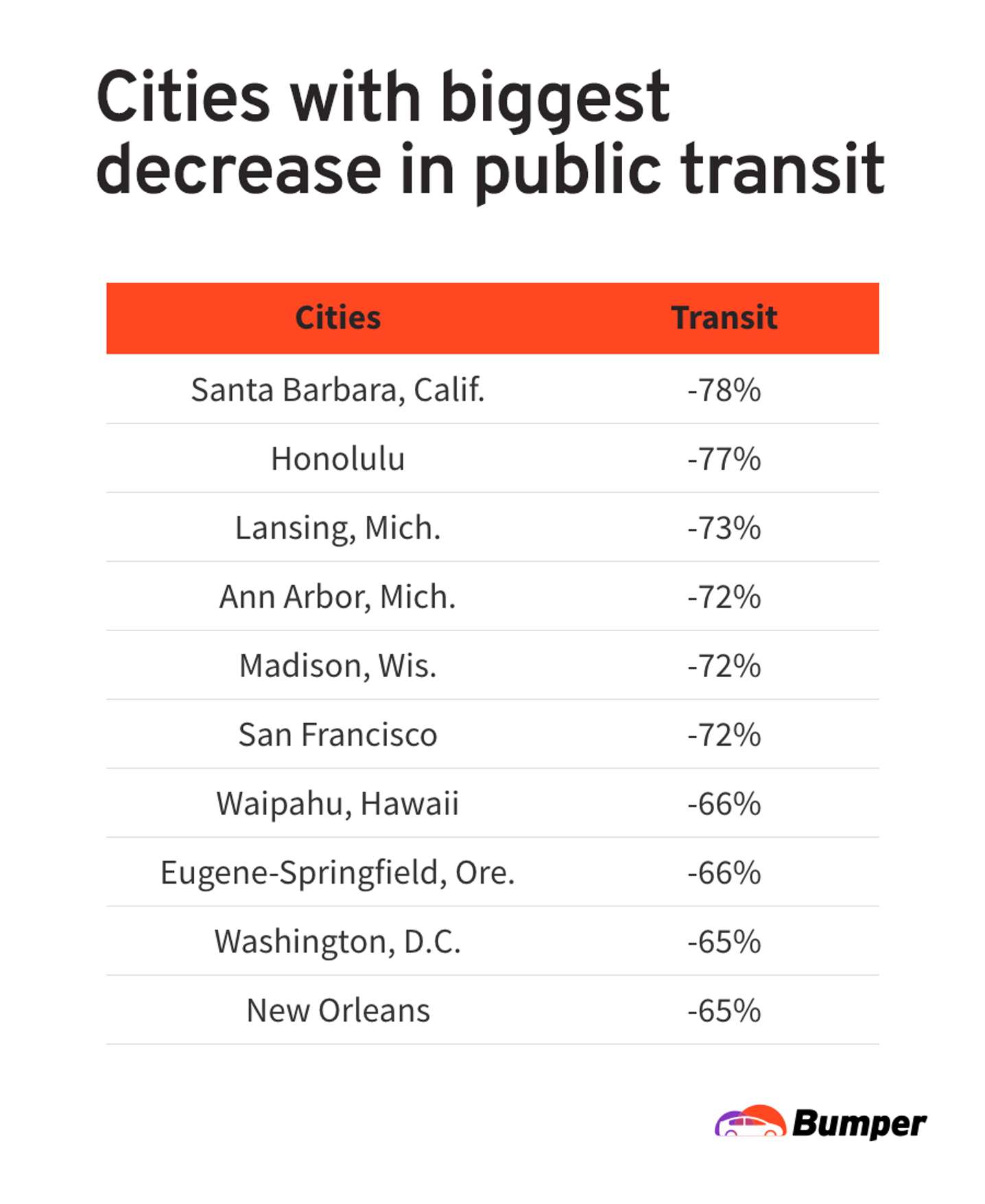 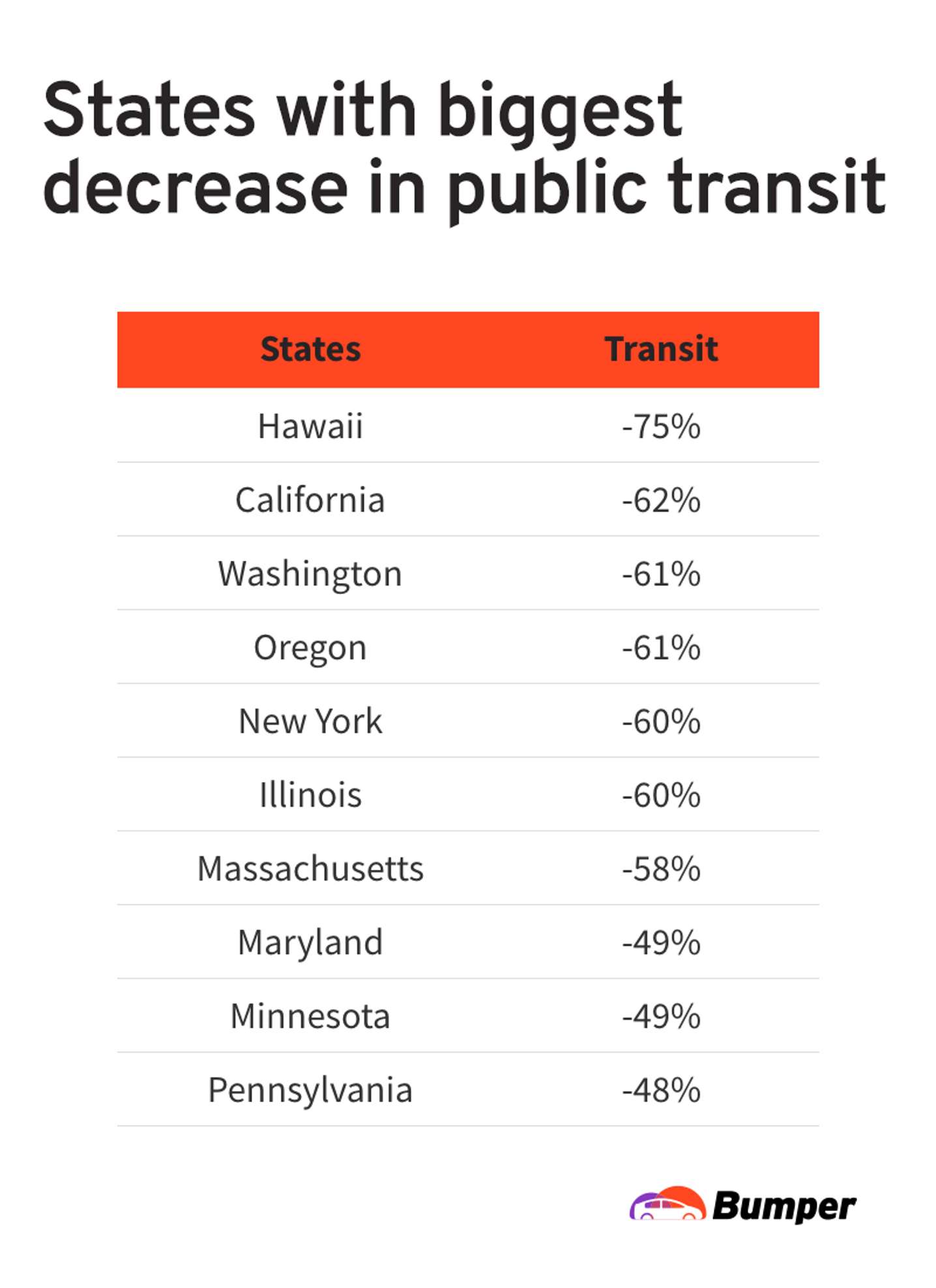 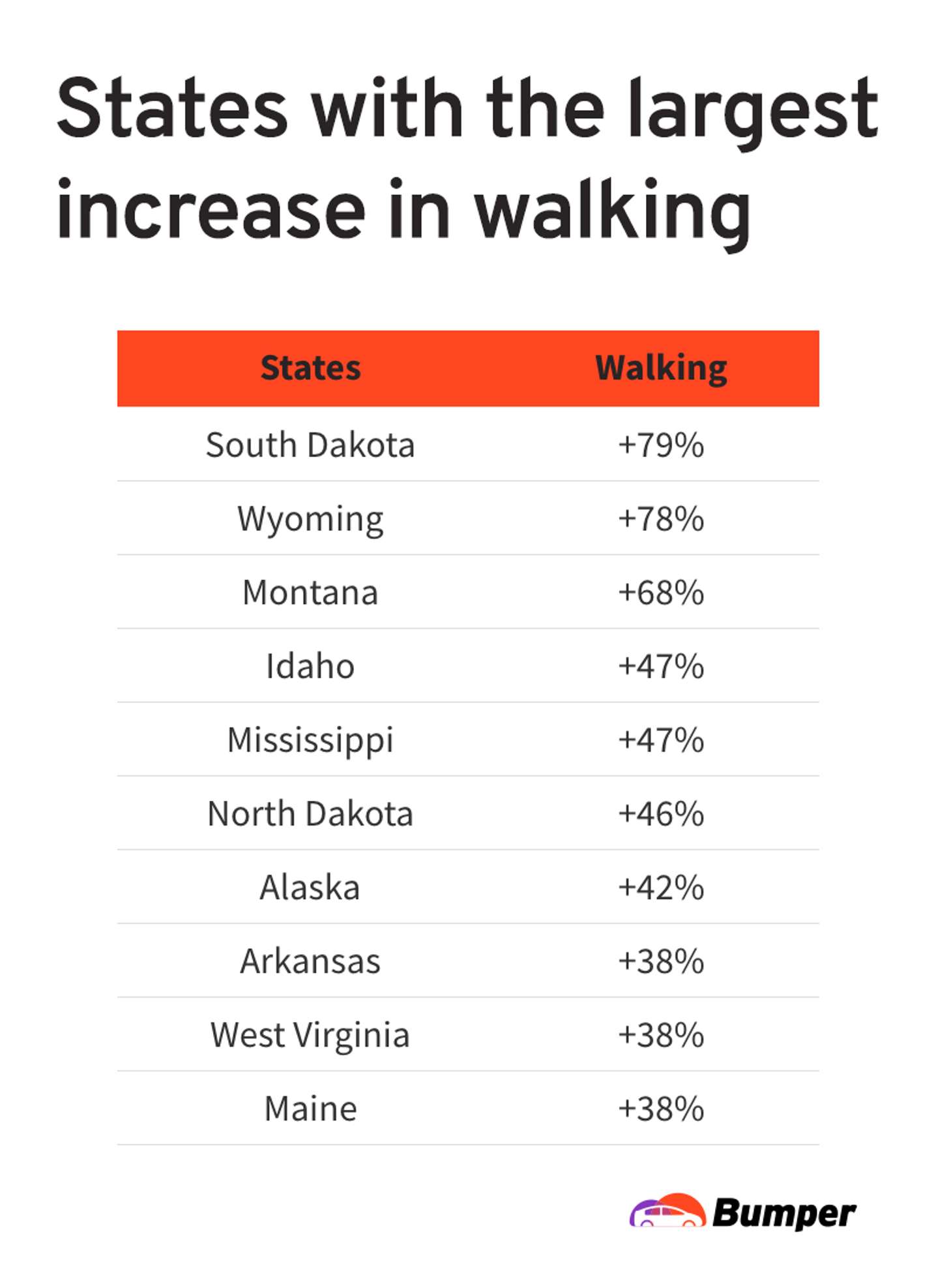 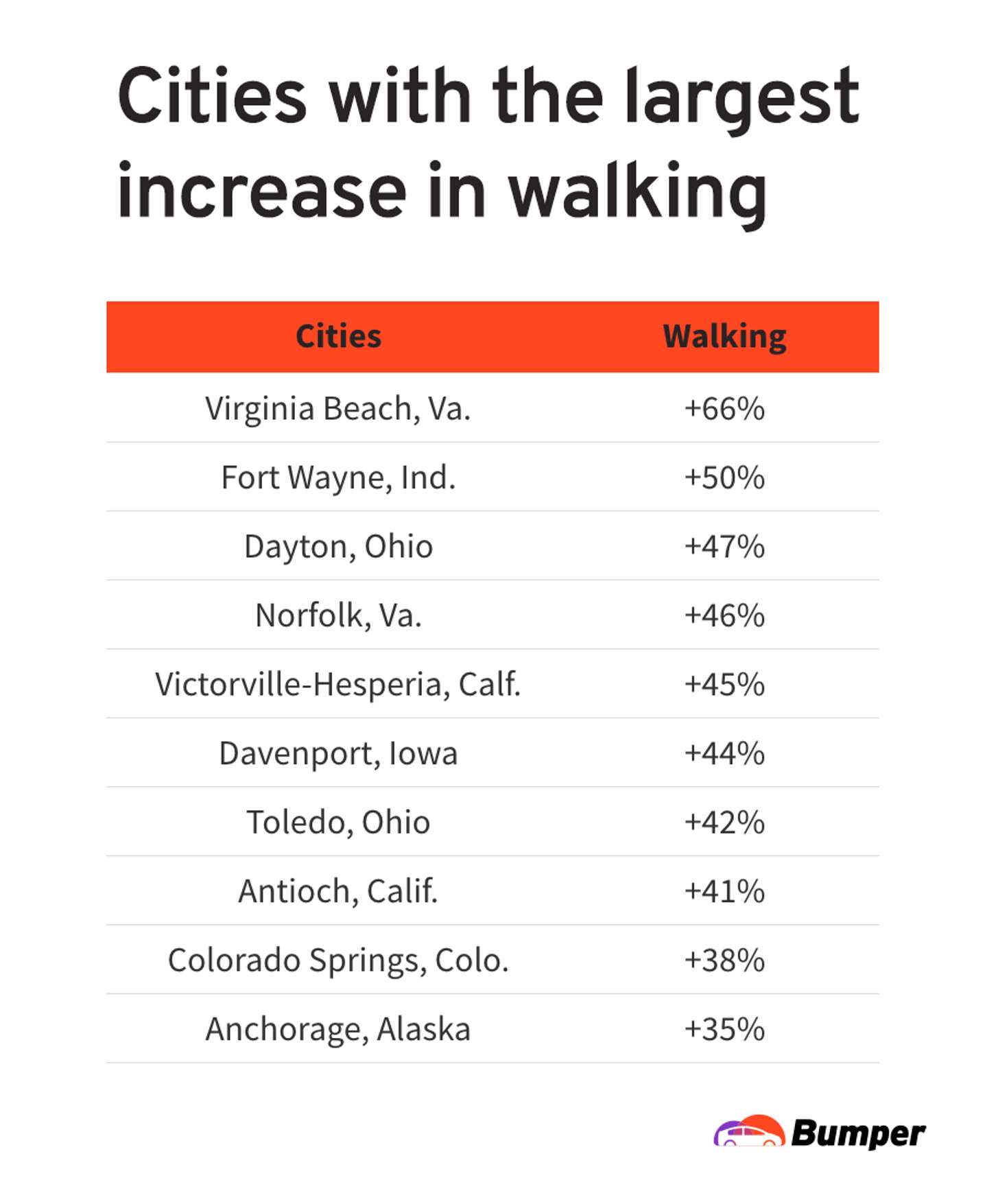 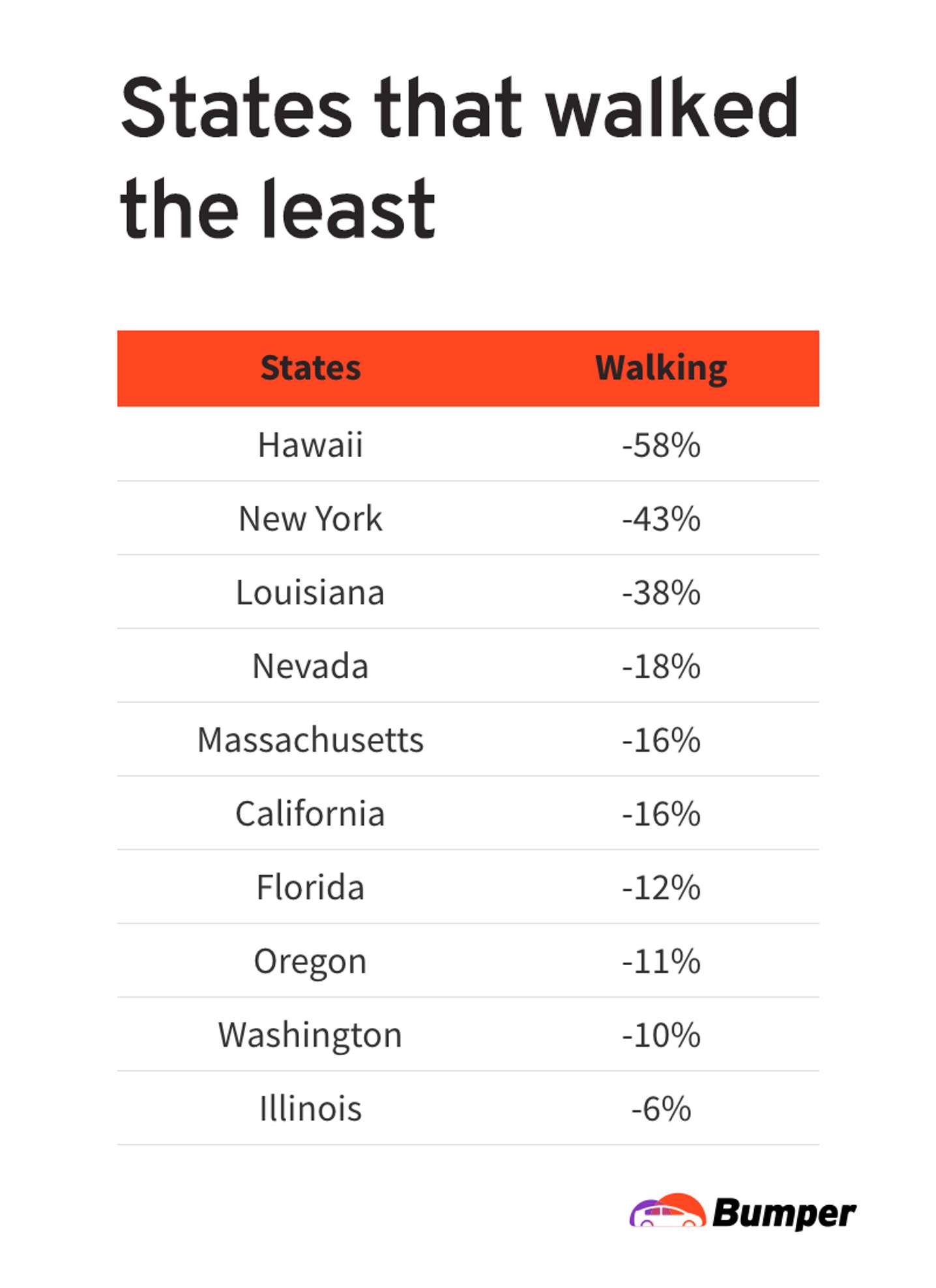 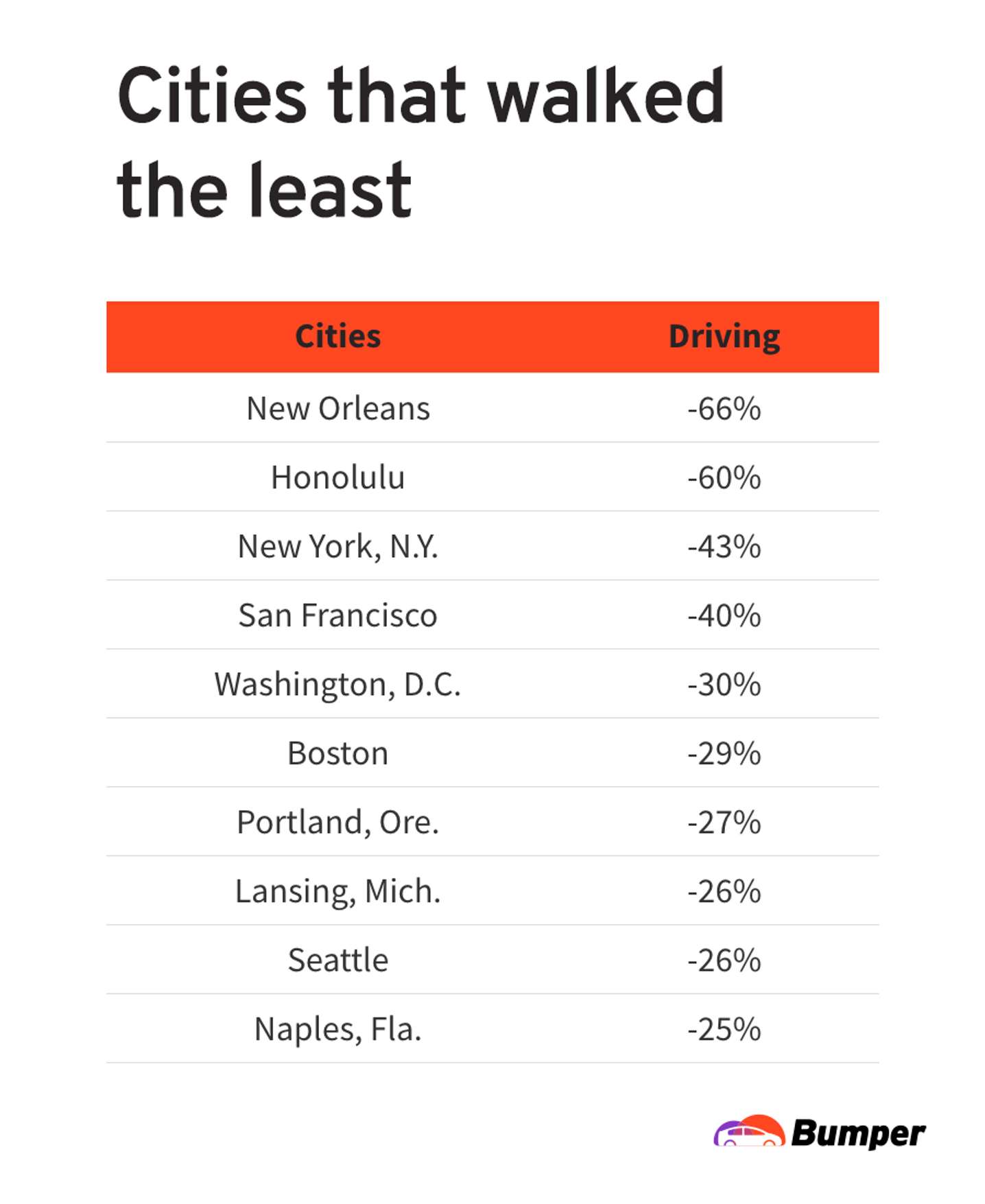 “One limitation of the study is we only have 2020 data from Apple, and the Jan. 1-March 15 pre-lockdown period is during winter months,” Schlossman said. “Many of the states and cities that saw an increase in walking post-lockdown were in colder climates, which may account for some of the post-pandemic increase.”

Bumper analyzed mobility data released by Apple Maps with aggregated navigation data for the United States and 111 major cities from Jan. 1 through Dec. 31, 2020. Percentage increases and decreases in driving, public transportation and walking activity were indexed against the weekly average from Jan. 1 through March 15, 2020, shortly before states began issuing lockdown orders.