The Real Difference Between 4 High and 4 Low Drive

Decades ago, trucks only offered rear-wheel drive or difficult to use four-wheel drive. Today, nearly every crossover offers all-wheel drive, and plenty of trucks have four-wheel drive high, low and automatic settings. There are critical differences in 4WD high vs low driving conditions, and using it improperly will cost you money. If you have a new vehicle with 4WD, let’s cover the difference between four high and four low.

What is four wheel drive?

In its simplest definition, four-wheel drive (4WD) is what it sounds like: a vehicle delivering power to all four wheels. With twice as many wheels getting power compared to two-wheel drive, the tires all divide the task of traction so your truck can tackle hazardous conditions, like deep snow or sand. The basic idea is that if one or more wheels spin due to slipping or leaving the ground, the truck keeps moving because the other wheels have power. Modern work trucks and off-road-ready SUVs have 4WD to conquer the washed-out trails and massive craters at job sites.

Manufacturers have developed several clever ways of driving power to all four wheels, including using electric motors to provide grip for front-wheel-drive cars. However, true four-wheel drive is a mechanical linkage between the transmission and the axles. In a 4WD vehicle, the transmission provides engine force to the transfer case, which uses gear ratios to reduce rotational speed and act as a torque multiplier. The transfer case spins two drive shafts, one front and one rear, transferring power to the differentials and gears, in turn spinning the front and rear axles bolted to the wheels.

Without a differential, or with only a simple “open” differential, power is supplied to only one wheel, for a low-grip vehicle. Picture an economy car on ice, trying to accelerate from a stop as one tire spins furiously. Differentials make the left and right wheels spin equally when accelerating in a straight line, but also let the wheels rotate at slightly different speeds when needed, such as during a corner. This is called a “limited-slip” differential, as it limits the speed difference between the left and right sides.

A locking differential forces both wheels to rotate equally. This has the advantage of sending all torque to whichever tire has grip, but causes excessive tire wear if permanently locked. This is important to know for the settings below.

We’ve been conditioned from video games, microwaves and hair dryers that “high” equals more power, so “4 High” should mean awesome off-roading capability, right? By that logic, you might use 4 Low in benign conditions, and 4 High for a deep muddy road. That’s actually the opposite of what truck manufacturers want you to do. The difference between 4 high and 4 low depends on a couple of factors.

Think of this mode as 4WD Highway. “High = Highway” here because this 4WD mode is meant for use during higher vehicle speeds, including highway use up to 55 MPH. Snowy rural roads or wet sandy beaches? 4WD High is likely the setting you’ll need. Think of 4WD High as a mid-range gear in the transmission, such as third. You wouldn’t want to (or be able to) drive 55 MPH in third gear, due to excessive engine RPMs. Because the transfer case is engaged and reducing speed, the system wants you to keep a reasonable speed for maximum grip. Consider that a hard speed limit, as excessive speed causes damage to the transfer case.

If 4WD High is for higher speeds, think of 4WD Low for your low-speed traction needs. From deep snow, dry sand, fording streams to rock crawling or mudding, or pulling a boat out of the water, 4 Low should get you out of it. The “low” is serious, as you need to keep it below 15 miles per hour. Also, this isn’t the mode for ice. The slippery surface, plus huge torque to the wheels, means you’ll be going nowhere.

Another no-go is using 4WD on a perfectly fine dry road. With 4WD engaged all the time, you’ll notice bumps and thumps as you take corners, which is a sign the axles are binding and you are causing premature axle wear. Save 4WD Low for the nastiest roads.

What about 4WD auto?

A relatively new feature, the 4WD Auto setting uses the vehicle’s sensors and traction-control system to best determine when to use 4WD. This setting offers more traction than 2WD, but isn’t as rigorous as 4WD High or 4WD Low.

In the 2WD setting, the truck transmits power only to the rear wheels. This saves you gas money by not spinning all that extra weight and maintenance costs by effectively removing half the drive train from operation. Use 2WD in most daily driving, nice weather, and good road conditions.

Switch to 4WD Auto when it rains, or on gravel roads, or if a bunch of marbles spilled on the ground, sitcom-style. If your vehicle starts with the 4WD Auto setting, use it as your everyday setting. The vehicle will mostly drive in 2WD mode, and automatically switch to 4WD as road conditions require. 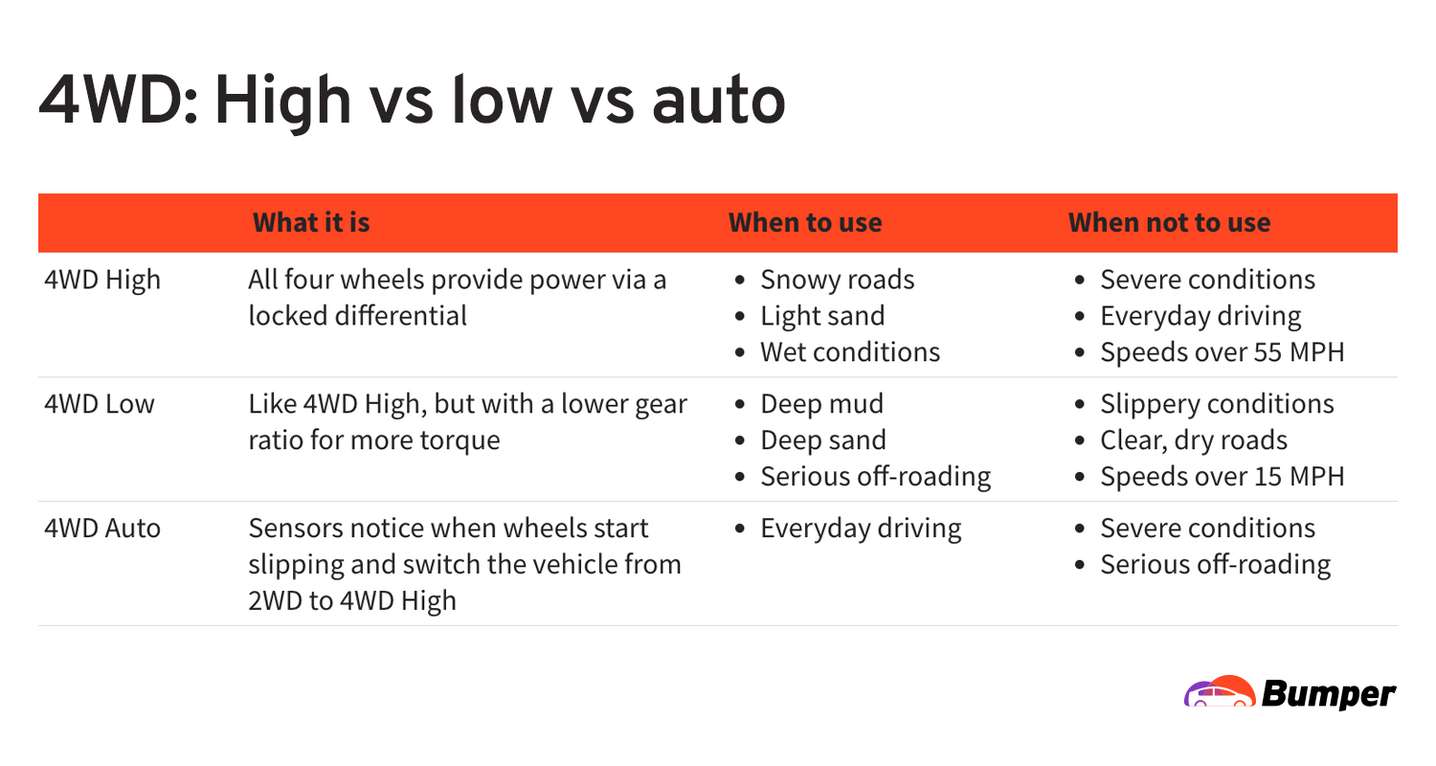 Most vehicles have four wheels, so all-wheel drive (AWD) is the same thing as four-wheel drive, right? Not quite. AWD is usually a full-time system where you don’t need to make selections for different modes or speeds. AWD uses wheel speed sensors to detect when a wheel has lost grip, and complex viscous coupling or clutch systems to send torque to the wheels with traction.

A car like the Subaru Impreza uses full-time AWD, continually sending power to all the wheels for on-road driving confidence in inclement weather. Part-time AWD is also available. The Toyota RAV4 has AWD, to send 50% of its power to drive the rear wheels. However, it also has an automatic rear driveline disconnect, to operate as a front-wheel drive vehicle for more fuel efficient commuting.

AWD is excellent for both vehicles, but it’s not the same as a dedicated 4WD system in a Ford F-150. The direct connection through the transfer case is what makes a difference at low speeds, and part of why you’ll have a harder time pulling a boat out of a lake with a RAV4.

Car Body Styles: Everything You Need to Know

Payload Capacity: Everything You Need to Know

Everything You Need to Know About Truck Cab and Bed Sizes

SUV vs. CUV: What's the Difference?