Everything to Know About Your Car's Engine Block

The engine block is the heart of any internal combustion engine. You may have heard the term numerous times without really understanding what it meant, and “what is an engine block” is a question mechanics hear more times than you might suspect. To really boil the answer down, the engine block is what holds an engine together.

What is an engine block?

Inside the block are the pistons, crankshaft, bearings and other reciprocating or rotating assemblies that allow the engine to produce power. Early engine blocks were made with cast iron in one solid mass that weighed a few hundred pounds. The engine block is one of the heaviest components in an entire vehicle and requires a few people to remove it and handle it safely.

Aluminum engine blocks were developed in the 1960s. Early aluminum blocks had problems with oil consumption as wear set in and building tolerance loosened. Newer alloy or aluminum blocks typically have an iron sleeve inserted into the cylinder bores to prevent this kind of wear, or they may have a hardened chrome surface in the cylinder linings. Newer blocks may feature a modular design of components fastened together, but the car engine block still serves the same function.

What does an engine block do?

All the parts involved in this process are contained within the engine block of a car.

Despite the name, the engine block is not a single piece of equipment. It’s composed of multiple components, all of which play a role in an engine’s operation.

The deck (or head) is the very top of the engine block. It’s machined to be completely flat and smooth. The engine’s cylinder head is bolted to this smooth surface, with a gasket ensuring a tight seal for good compression and oil control. The cylinder head is what contains the valves, which open and close to receive the fuel/air mixture and expel the exhaust gases. The head also contains the valve springs and often the camshaft. On a V6 or V8 engine, the deck will also have a valley in the center between the two banks of cylinders. The intake manifold is fastened to that valley.

Sometimes referred to as the engine’s “bottom end,” crankcase is what contains the crankshaft, crankshaft bearings and oil pump. The oil pan is bolted to the bottom of the crankcase to provide a sump that can hold several quarts of oil for proper lubrication. The crankcase also has a provision for ventilation because a small amount of exhaust gases will slip past the piston rings into the crankcase. This phenomenon is known as “blowby.”

The engine’s cylinders are part of the crankcase. These are smooth-bored tubes that contain the pistons, which travel up and down in the combustion process. The pistons are large slugs of metal that are smooth and perfectly round. They’re fitted with rings that ensure a good seal between the cylinder wall and the piston itself for oil control and compression.

Motor oil needs to travel to components in the block and cylinder heads. Since the early 1950s, engines have used an oil pump in the block to pressurize and circulate oil. Oil passages (also sometimes called galleys or the oil gallery) are pre-drilled into the block to allow oil to travel.

Engines also feature water jackets, which allow coolant to circulate around the engine block to dissipate heat. Some transverse engines (where the engine sits at a right angle to the wheels) have been designed with the transmission and engine block in the same housing and sharing the same oil, but this is uncommon because of its complexity. 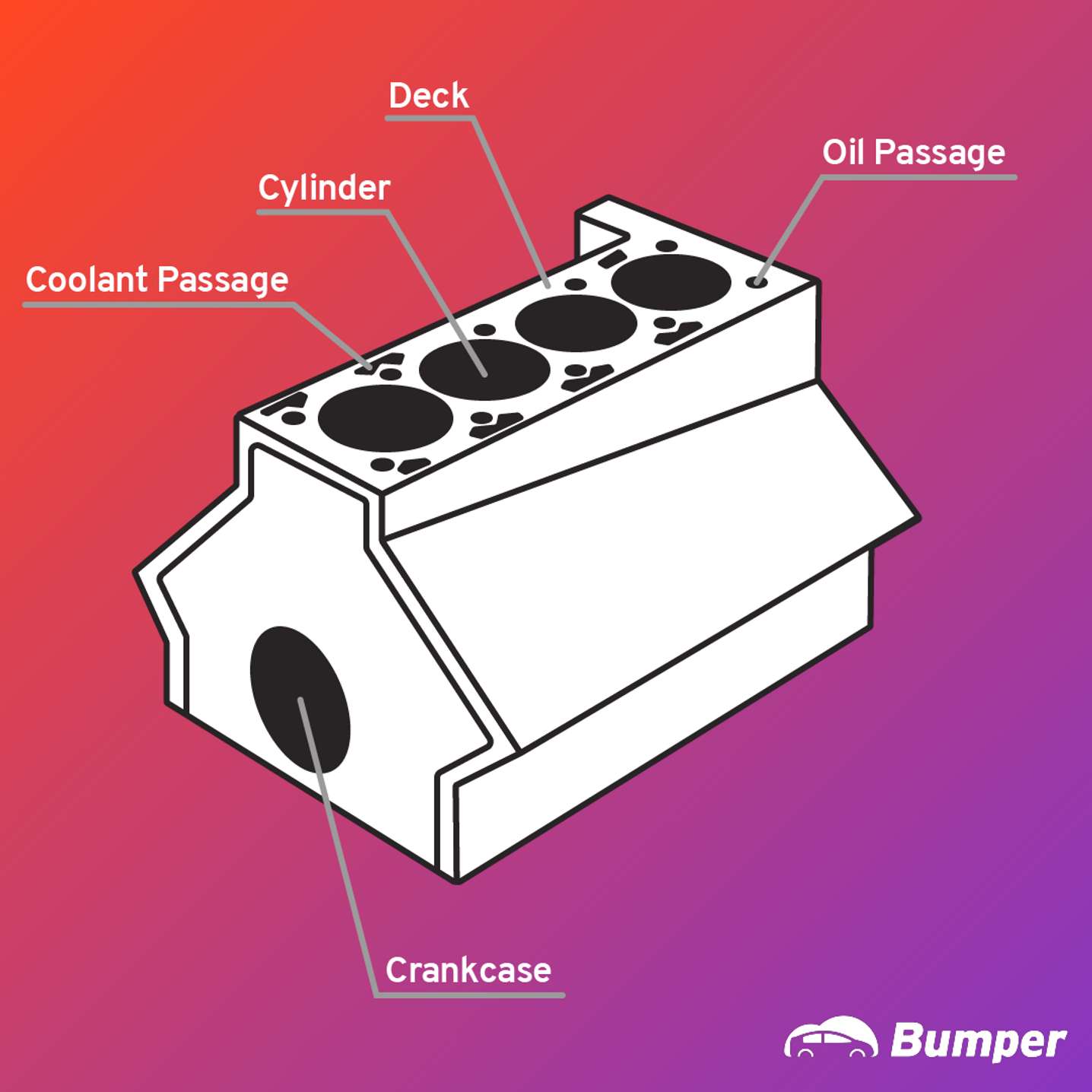 The engine block is designed to last the entire life cycle of the vehicle, and it usually does. That doesn’t mean failure is impossible, though.

As mentioned above, aluminum is an inherently softer metal than iron with a lower melting point. That’s why sleeves or inserts for the cylinders are necessary with many aluminum or alloy blocks. In some cases, a cast-iron block can wear prematurely and be “porous” because of poor metallurgy. If that happens, the engine will need to be replaced. Factory recalls usually cover these issues when they are found at scale. For example, such a recall was issued for 2006-2009 Honda Civics in 2014.

Engine blocks get extremely hot during normal operation because of friction and heat generated by the explosions in the cylinders. When the engine overheats because of poor oil circulation or poor cooling, the block can crack and allow coolant or oil to seep out. Sometimes a cracked block is repairable with a surface sealant such as JB Weld. More often, the block (or the entire engine) needs to be replaced.

Cracks due to freezing

Engine blocks have “freeze plugs” that guard against cracks because of freezing. Your engine’s coolant does more than cool off the engine on hot days—it’s also formulated to protect against freezing weather. In extreme cold, if the coolant freezes and expands, it pushes out the block’s freeze plugs and relieves the pressure from expansion, cracking the block in the process. With modern coolant and engine designs, cracked blocks because of freezing are rare but not impossible.

What Is an Engine Flush and Do You Need One?

What Is a Misfire?

5 Signs of a Bad Spark Plug