Why Are Pickup Trucks So Expensive Right Now?

Next time you’re watching TV, look at any truck commercial. You may see the truck blasting over sand dunes, working at a job site, towing something massive up a mountain and then taking a couple out for a night downtown. The pickup truck started as a basic work vehicle, but the average new truck now costs $50,000. Why are trucks so expensive? There are quite a few reasons behind the startling price increase. Let’s look at why pickup trucks are so expensive. 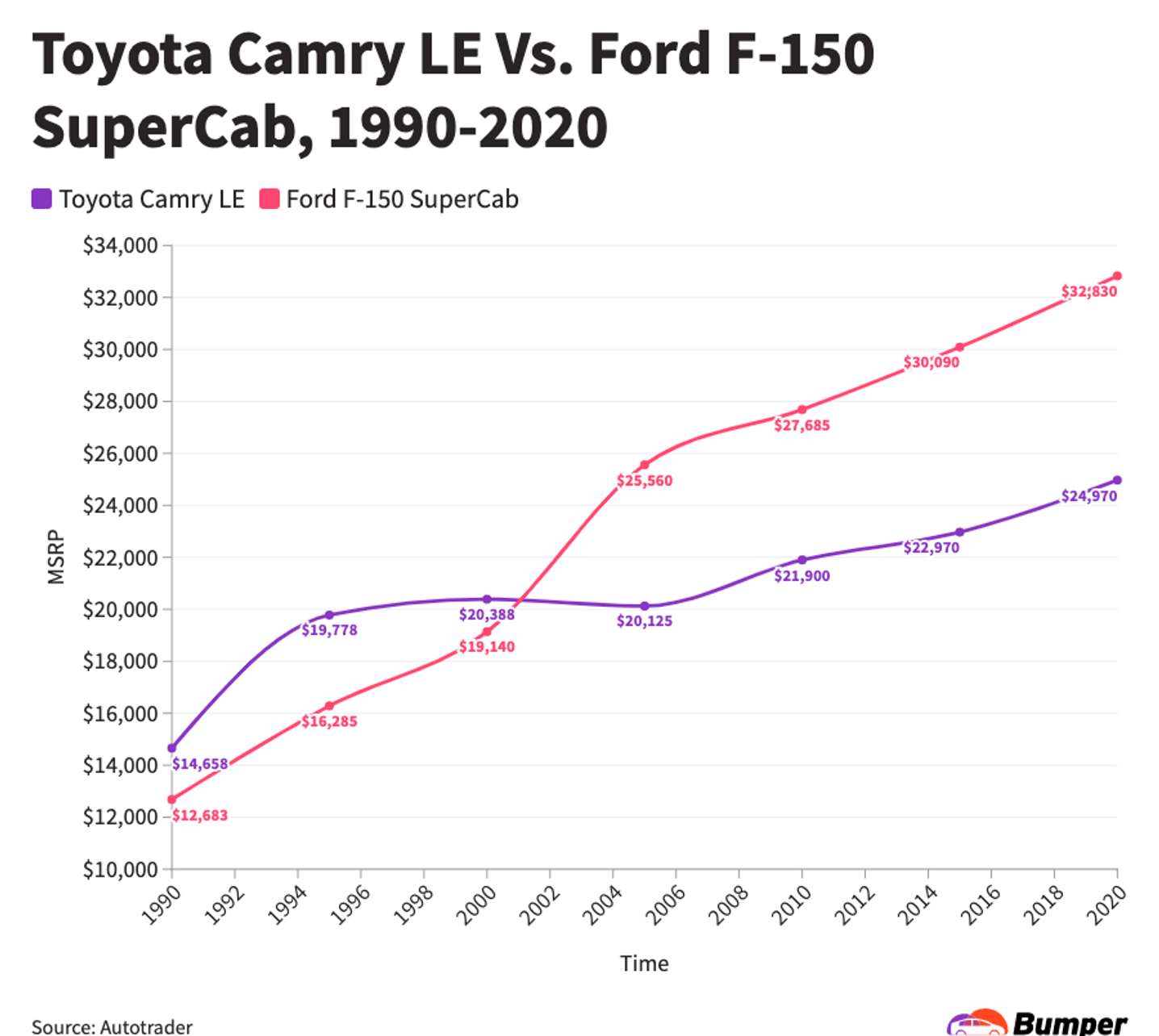 When normalized for inflation, the same full-sized sedan costs virtually the same today as it did 30 years ago. But a truck that used to cost 2% more than an average family car now costs over 30% more. Why are trucks more expensive?

Trucks are the new family car

Pickups have been strong sellers for decades, but the recent demise of the family sedan is due in part to buyers’ shifting preferences to trucks. No longer just a work/utility vehicle, trucks expanded to the new role, filling cabins with family-friendly features. Changing a bare-bones work truck into a family vehicle doesn’t come cheap.

“With frequent upgrades in technology and implementation of stringent emission standards by the government, trucks are going for an all-inclusive feature list that’s focused on both fuel efficiency and consumer satisfaction,” said Ajay Serohi, a staff product manager at Tesla.

Despite improvements, the average truck gets seven fewer miles per gallon than the average car. When gas prices increase, fuel economy matters to new vehicle buyers. As gas prices fall, buyers go back to thirstier vehicles. With several years of low fuel prices in the rearview mirror, fuel economy is low priority. This makes sense, as AAA reports that falling fuel costs make for a lower cost of ownership, even for vehicles that are considered gas guzzlers.

Or more specifically, the torque wars. It’s not just increasing family car technology—trucks are increasing work capability, too. Take a look at some older trucks and you might laugh. The 1980 Ford F-Series offered several engines, starting at a pitiful 110 horsepower and topping out at 153 horsepower and 309 foot-pounds of torque. It couldn’t get out of its own way.

Fast forward 40 years, and the smallest gas engine in the 2020 F-Series lineup has 290 horsepower, with optional engines blasting out 450 horsepower and 510 foot-pounds of torque. Turbochargers, direct injection, aluminum body panels and smart computer tuning all increase the towing capacity, but it all costs research and development money that gets passed to the customer.

Trucks are getting more luxurious

Have you spent any time in a high-end Dodge Ram? The interior has the refinement worthy of a Lexus badge and even won the truck a luxury car award. There’s everything you could ask for in a luxury vehicle: giant touch-screen infotainment, double-stitched, full-grain leather, wireless charging, Wi-Fi and more.

“Whether it’s guided parking, cruise and collision control or park assists, modern trucks come packed with features that have as much to do with safety as they have to do with luxury,” Serohi said. “Massaging seats, heated steering wheels, upgraded stereo systems and fancy lighting are a few of the examples of how technology is being collated with comfort to raise the bar.”

Luxury vehicles of all kinds command a higher price.

That higher price becomes reasonable over a longer term. Lenders have realized buyers focus more on the monthly payment than the total cost. This is why car loans averaged three years in 1980, increased to four and a half years by 2000 and hit an average length of six years in 2020. Payments on a $30,000 truck are easier to swing when they’re spread out over six, seven or even eight years. Who would say no to a brand-new, full-size truck when the payments are only $380 a month? Because buyers can afford this payment, the MSRP can keep climbing.

An old GM chairman once said, “General Motors is not in the business of making cars. It is in the business of making money." They should have switched to trucks earlier—profit margins on pickups are basically money-printing machines. Reuters estimates GM makes $17,000 in profit for every full-size truck sold. Car profits are much lower, and sellers sometimes even take a loss on each car sold, so it makes good financial sense to push highly profitable trucks.

Trucks are expensive because buyers have increased truck demand through increased sales figures. In 2019, truck buyers signed on for nearly 900,000 Ford F-150s. Manufacturers increased production to increase supplies, but they also raised prices over the years. Truck buyers haven’t backed off, so prices continue climbing.

“Thus, customer demand is another reason why truck prices are at an all-time high,” Serohi said.

But why are used trucks expensive, too?

If new trucks are expensive, you’d think used trucks would be the better deal. Unfortunately, you’re probably going to get sticker shock from the price of used trucks, too. So, why are used pickup trucks so expensive? There are a few reasons.

Because of their heavy-duty, body-on-frame construction, trucks are overbuilt for daily driving. This is one of the reasons trucks are durable, even at higher mileage. An iSeeCars study showed the average truck is 1.6 times more likely to reach 200,000 miles compared to the average vehicle, and the 14 of the top 15 vehicles most likely to reach that 200,000 milestone are trucks and SUVs. Buyers will pay more for a used truck, knowing it will go the distance.

The other truck manufacturers took similar sales hits, essentially leaving future used truck shoppers with half the inventory they would normally have. Low supply combined with steady demand equals higher prices. Search any used car marketplace for trucks made in the late 2000s or early 2010s—pickings will be slim, and the prices may shock you.

Sometimes a truck is the only option

Quick, name a car that can tow more than 5,000 pounds, or an SUV that can tow more than 10,000 pounds. Before you fire up Google, here’s the catch: those don’t exist. If you are limited to one parking space or are financially or ecologically thrifty, it makes sense to only have one vehicle. If you need any cargo hauling or towing while comfortably carrying people, a pickup makes a lot of sense as your one vehicle. This, again, increases demand on a limited supply, simply because so much of the car market doesn’t fit the buyer’s needs.

What do a BMW 7 Series and a Nissan Leaf have in common? They both depreciate 71% after just five years. That wasn’t meant to be a joke, but it kind of is, especially compared to pickup depreciation. Trucks hold their value well, with the Toyota Tacoma and Tundra, Honda Ridgeline and Nissan Frontier all in the top 10 of least-depreciating vehicles. The average depreciation for all trucks is 42.7% after five years, while cars drop 49.6%. Used trucks are expensive because their prices refuse to come down.

That’s all why pickup trucks are so expensive. It’s not a satisfying answer, but it is an understandable one because of the beefy capability, reliability, luxury and technology features and limited supply in the used truck market. Keep looking. There are still occasionally some great deals on pickups (if you’ve got one in sight, you can check its VIN history).

What to Look for When Buying a Used Car

22 Questions to Ask When Buying a Car

Why Adaptive AWD Usually Isn’t Worth It #Shorts